E-cigarette and vape use has skyrocketed. About 10% of U.S. adults now vape, as the practice is called, almost four times more than the 2.6 percent reported in 2013. And that growth means big business: Sales are estimated at $10 billion for 2018 versus $1.2 billion in 2014, and are projected to grow about 25 percent annually through 2025.

E-cigarettes use a heating element to vaporize liquid nicotine, which is then inhaled. Vaping provides the sensation of smoking and the desired nicotine effect without combusting tobacco. Many smokers view e-cigarettes as a way to quit smoking traditional cigarettes, avoid some of the associated health hazards, or as an alternative to smoking in public places that ban the practice. Vapes are also used to consume marijuana and other illegal drugs.

No Regulations or Warnings

Vaping products are almost entirely unregulated by the U.S. Food and Drug Administration (FDA), a fact that surprises many users. That includes both the vaporizing devices and the nicotine-based liquid itself.

Today there are at least 500 different brands of e-cigarettes on the market, with over 7,700 flavors of nicotine liquid (although the FDA recently banned dessert flavors that often appeal to underage smokers). The amount of nicotine in the liquid, as well as other dangerous chemicals or carcinogens, are not monitored and are not required information on packaging. Nevertheless, research cited by the American Lung Association highlights the significant health risks posed by the nicotine and other hazardous chemicals found in e-cigarettes.

Use Triples Among Teens

Officials with the Centers for Disease Control and Prevention (CDC) expressed extreme alarm at the findings, pointing out the harm nicotine exposure can pose to brain development among young people, along with the potential for long-term addiction. Public health advocates also fear that unregulated advertising in print, on television and in social media by e-cigarette companies makes the product look “cool” and is driving increased use among young users.

Risk of Lung Injury and Disease: Still “Much We Don’t Know” 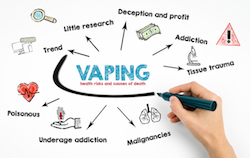 Healthcare experts are also sounding the alarm on vaping and serious lung disease. Dozens of vape users, many of whom are teens, have been admitted to hospitals with respiratory problems, including shortness of breath, chest pain, vomiting and more. According to the CDC, 2,409 people have been hospitalized due to vape-related lung damage as of December 2019, and 52 people have died.

Initially, healthcare investigators weren’t sure why vaping was causing this deadly outbreak. Now research from the CDC suggests that one potential culprit might be the vitamin E acetate used as a thickening agent in black market vaping products containing THC, the active ingredient in marijuana. But of course, that doesn’t mean that adults who only vape over-the-counter nicotine products are out of the woods, or that we aren’t putting an entire generation of adolescent e-cigarette users at risk of addiction and other serious health hazards.

“The truth of the matter is, we have so little experience with vaping, relative to the experience we have with cigarettes and cigars,” said Dr. Emily Chapman, chief medical officer for the Children’s Minnesota hospital system. “Recall how long it took us to figure out that cigarettes were linked to lung cancer. There is so much we don’t know.”