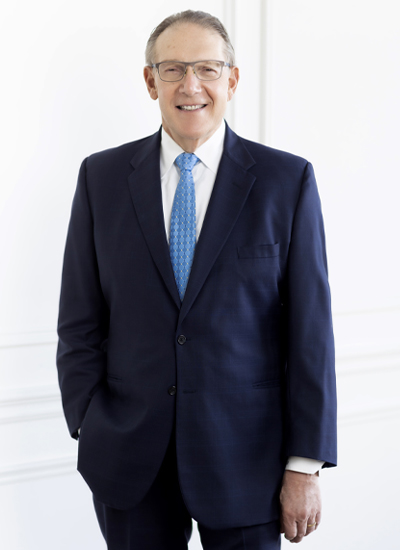 After my injury, I was anxious, overwhelmed, depressed and needed a reputable, respectable, professional, with high integrity, someone to fight to win, someone who cared and took a personal interest, someone that made me feel I was important, someone that would always be there to answer my questions or concerns during the legal process. I chose the BEST because I deserved the BEST and so do you. You need to make the call to Jules B. Olsman a priority so that you may become one of his“.

Jules B. Olsman is President of Olsman MacKenzie & Wallace. He has practiced personal injury law in Michigan for over 40 years, representing clients in cases involving nursing home negligence, medical malpractice, assisted living claims, group home injuries, truck, car and vehicle accidents, and police misconduct. He has also represented family members in wrongful death cases. During his legal career he has helped clients obtain tens of millions of dollars for their injuries.

Mr. Olsman was named in the Best Lawyers in America from 2007 through 2016 and was named the 2016 Personal Injury Litigation-Plaintiffs “Lawyer of the Year” in Troy by Best Lawyers in America. He was named a dbusiness Top Lawyer from 2010-2016. Mr. Olsman has been listed as a Super Lawyer from 2007 through 2015. Additionally, he was named to the Michigan Top 50 Consumer Super Lawyers list in 2013-2015 and the Michigan Top 100 Super Lawyers list in 2009-2015. Mr. Olsman has been ranked at the highest level of professional excellence by Martindale-Hubbell, was recognized as a Leading Lawyer in Michigan from 2014-2015, and was selected as a 2015 Michigan Lawyers Weekly “Leader in Law”.

Mr. Olsman is a past president of the Michigan Association for Justice (2000-2001), and has served as an adjunct professor at Michigan State University College of Law where he taught medical malpractice litigation. He was appointed by Governor Jennifer Granholm to serve on the Governor’s Task Force on Elder Abuse, and has testified many times before the Michigan legislature on long-term care issues. He also served as legislative counsel and as a member of the Executive Board of Citizens for Better Care.

He is a past chair of the State Bar Negligence Law Section and a founding member of the American Association for Justice Nursing Home Litigation Group.

As a lawyer for more than 40 years, I’ve seen first-hand the devastating injury and loss of life suffered by clients and their families as the result of the actions of others. In addition to the physical pain and suffering, the financial circumstances of the injured and their families can be significantly impacted, particularly if the primary breadwinner of the family is the one who was injured and cannot work. In most cases, the entire family suffers in some form.

While injuries and death may have resulted from negligent actions, there is nothing negligent about the way accident victims are usually treated by the insurance companies of those responsible for causing serious injury.

In most cases, insurance companies seek to deny liability, delay cases, and shift blame onto others (including the accident victim). If a settlement is offered at all, it tends to be significantly less than the true value of the damages sustained.

Our firm works hard to establish liability as soon as possible in a case.

Through the course of depositions, interrogatories, research, and other fact-finding, we seek to prove the liability of the defendants so that they will have a strong incentive to enter in to a fair settlement rather than risk a higher judgment at trial. If an acceptable settlement is not offered, we are well prepared to prove the case of our clients to a jury.

If you have been injured due to the negligence of another person or entity, I would invite you to call me so that we can meet to discuss your case at your convenience.

There is no charge or obligation for this meeting, and I will give you an honest assessment of your case, and explain how our firm will work hard on your behalf if your case is accepted.

Mr. Olsman frequently lectures on nursing home and assisted living liability as well as other issues involving personal injury cases. He has authored numerous articles in publications such as Trial Magazine and Michigan Lawyers Weekly. He served as an adjunct professor at Michigan State University College of Law where he taught medical malpractice litigation.