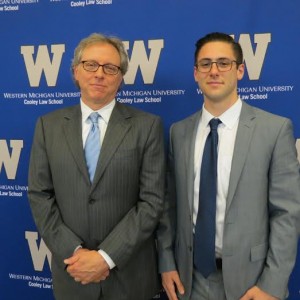 No one will argue that earning your law degree is difficult. Life after the degree, however, often proves to be even more challenging. With so many open doors and winding paths, it can be overwhelming and confusing when deciding which path is best for you. Attorney Ben Lesnick knows the feeling, so when the National Association of Women Judges (NAWJ) and Western Michigan University’s (WMU) Cooley Law School invited him to serve as a mentor for their MentorJet program, he was more than willing!

On Thursday, June 9, Ben joined several other leading law professionals at Cooley Law School’s Auburn Hills campus for the MentorJet program, which is a speed-mentoring session that gave WMU-Cooley Law School students the opportunity to have one-on-one conversations with judges and lawyers from their community about law practice and career opportunities. After the speed-mentoring session, the professionals and students had half an hour to network and share their career-related questions, experiences and aspirations.

“My favorite part of the event was the networking. It was nice being able to take time to answer the student’s questions without a time limit,” said Ben. “I would certainly like to participate again!”